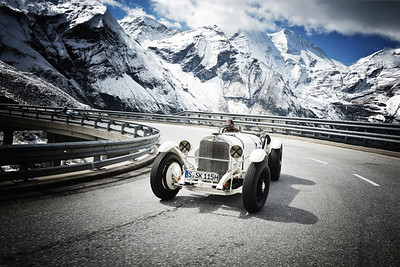 The SSK (model series W 06) is the most exclusive and fascinating of the six-cylinder supercharged sports cars belonging to the Mercedes-Benz S-Series. The model designation stands for “super-sports-short”, for its particularly sporty character and its shortened wheelbase. In the summer of 1928, Rudolf Caracciola won the Gabelbach, Schauinsland and Mont Ventoux races in the brand-new SSK at the first attempt. In 1930 and 1931, he won the European Hillclimbing Championship at the wheel of the SSK. The lighter and yet more powerful version from 1931, which was also known as the SSKL, also scored some spectacular victories, one of the most outstanding being in the legendary 1,000-mile “Mille Miglia” race: The arduous road race from Brescia to Rome and back was won by Rudolf Caracciola driving an SSKL in April 1931. He thus became the first non-Italian driver ever to win the race. 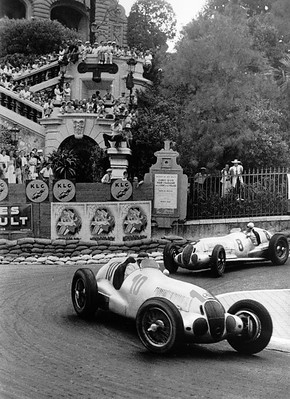 The Mercedes-Benz W 125 was developed as the successor of the 12-Cylinder record car W 125 by a new team formed by Rudolf Uhlenhaut who chose a revolutionary chassis design principle had promoted a new 5.7 litres, eight-cylinder in-line engine with supercharger with the outstanding power of 592 hp (435 kW), or around 73 kW (99 hp). The top speed of the W 125 was around 320 km/h. The three cooling vents in its front section give the W 125 an unmistakeable look. The new Silver Arrow started off by winning the very first race it entered, the Tripoli Grand Prix (Libya), raced by Hermann Lang. With no less than seven victories, nine 2nd and six 3rd places it dominated the 1937 racing season, and Rudolf Caracciola went on to win the Grand Prix European Championship for the second time. 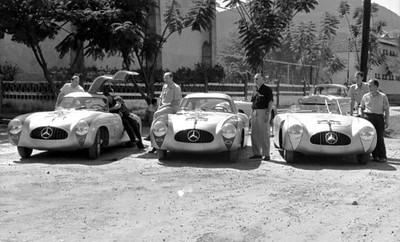 The new 300 SL racing sports car (W 194) made use of many existing components: axles, transmission, and the basic engine were taken from the Mercedes-Benz 300 (W 186) prestige saloon. Entirely new was an extremely lightweight yet highly torsionally rigid spaceframe, clad in an elegantly curved, streamlined bodywork made from aluminium-magnesium sheet metal. Since the spaceframe extends quite far up the sides, the W 194 could not be equipped with conventional doors  – this is how the racing sports car got its characteristic gullwing doors, hinged at the roof. The car is powered by an M 194 125 kW (170 hp) in-line six-cylinder engine with a displacement of 2,996 cubic centimetres.