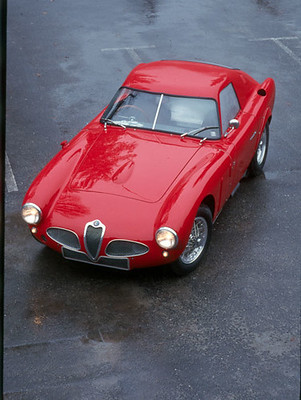 In those years changing body was almost as simple as changing trousers. Engineers were constantly experiencing the best combination of car, driver, track and race to get the best performance and the bodywork could make a difference. The barchetta was lighter for the engine and cooler for driver. The berlinetta was better for aerodynamics, more comfortable through endurance races (like the 24 Hours of Le Mans) but hot inside. This explains the rapid change of bodyworks on the same “motorized chassis”.

As we said, Fangio’s car for the 1953 Le Mans race was redesigned by Carrozzeria Boano in 1954 and it is precisely this, more comfortable and heavier bodywork, that Mr. Wessells III acquired it in 1970.

The Boano Berlinetta AR 6C 3000 CM gave her “curator” plenty of satisfactions and rewards and was treated with the greatest care. Its mechanics were refurbished in 1979 and the body was painted anew in 1980. Wessells III also took her out often, for some historic car races between 1980 and 1982.