Three cars for the 1953 Mille Miglia.

Three cars were completed for the 1953 Mille Miglia and raced on April 25 and 26. They were driven by Juan Manuel Fangio, on car with chassis number 00123 and race number 602  (with Giulio Sala as co-driver and mechanic); by Consalvo Sanesi with Piero Carini (number 631) and one by the team formed by Karl Kling and Hans Klenk. Two of those cars did not finish the race because of chassis failures that led to accidents but for most of the race Karl Kling and Juan Manuel Fangio led the race well ahead of Ferrari and Maserati, proving the were clearly superior. Trough the Rome time line, at half race, there were two Alfa Romeo in the top places, followed by two Ferrari and one Lancia. Karl Kling was first overall with a time of 5h38’38”, Fangio was second, 40” behind and Giannino Marzotto, racing a Ferrari 4100, was exactly four minutes behind Fangio.
However Kling car’s was off the road on the way back from Rome and towards the end of the exhausting race the steering wheel broke on Fangio’s but the Argentinean was brave enough to finish the race in second overall place, despite his car was actually steering on one wheel only. After the finish line in Brescia, Fangio told reporters: “On the mountain roads between Florence and Bologna the chassis broken just where the steering box was mounted and as I wound the steering wheel from lock-to-lock so the broken support tube moved around and allowed the steering box ‘to think for itself!’ Consequently I found that when I steered to the right the car would only straight on.” How he managed to finish the race is something only Fangio knows. But he did it and gained a fabulous second place. That was Fangio!
For the next major race of the Sports car World Championship season, the 24 Hours of Le mans, on June 13th and 14th, Fangio got a new car, precisely this one, with engine number 00507. He shared its steering wheel with Onofre Marimon, a very fast driver, also from Argentina. The car had race number 22 and did not finish the race because one of the pistons burned out.
Subsequently, the car was used by Fangio and Sanesi for test and practice in the Gran Premio Supercortemaggiore raced at Merano. Fangio however won that Grand Prix driving another AR 6 3000 CM, the one with chassis number 00127 that was originally built as a “berlinetta” and converted into a Spider in August 1953 by Colli, just in time for the race. 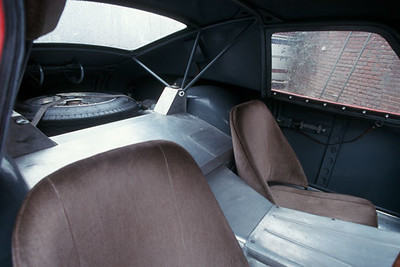 The light but weak chassis of the AR 6C 3000 CM series had a frame of the backbone type and was made of alloy steel tubing. The front suspension had the double wishbone architecture with coils springs derived front those of the Alfa Romeo 1900 Sport sedan. The DeDion rear suspension was a refinement of the one previously developed for Grand Prix cars and incorporated a triangular connecting frame with Watts link. This was very similar to the sophisticated suspensions used for many years in the Alfetta series through the last Alfa Romeo SZ.